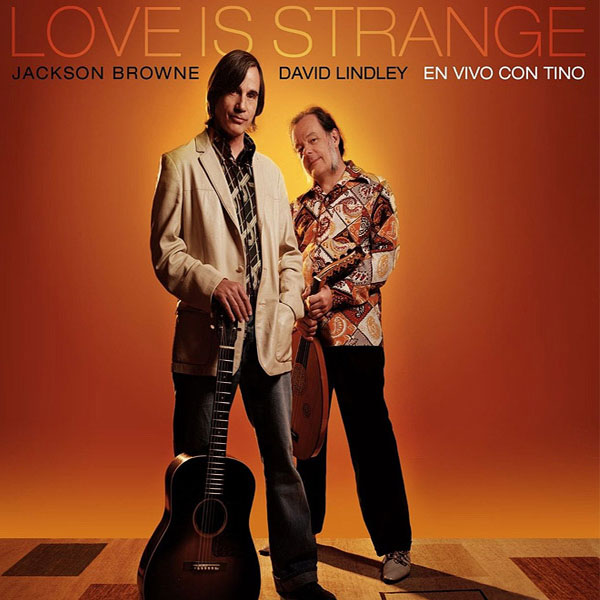 Inside Recordings
AllMusic Review by Thom Jurek
Love Is Strange: En Vivo con Tino is, simply put, a double CD that documents Jackson Browne's and David Lindley’s short Spanish tour of 2006. But it’s actually far more than that. While the song titles may be familiar to fans of both men, they don’t begin to tell the musical story on display here. Lindley and Browne were accompanied on all dates by the great flamenco percussionist, rock drummer, and producer Tino di Geraldo, and on select concerts by well-known Spanish musicians flutist Carlos Nunéz, vocalists Kiko Veneno and Luz Casal, banduria player Javier Mas, and others. Beautifully recorded, this set shows what Browne is capable of when he has musical foils who will not allow him to simply rest on his laurels. Lindley is, as expected, brilliant in shaping the textures and surfaces of these songs as well as highlighting the more subtle melodic touches in them, and Di Geraldo's rhythmic interactions push these two to play at their level best. The interplay between him and Lindley is near symbiotic, even on the most basic of tunes like “Mercury Blues” or "For Taking the Trouble,” where the percussionist plays tablas to Lindley’s bouzouki. The Latinization of “El Rayo X,” with Browne on a baritone guitar and stellar harmony vocals by Lindley is a high point. Lindley plays fiddle on “Take It Easy,” and transforms it into something that envisions a Spanish bluegrass. “These Days,” with Casal’s heavily accented guest vocal, the fiddle, and di Geraldo's cajón, makes an already beautiful song exquisite. Lindley’s Hawaiian guitar transforms “Running on Empty” from its former place as a rock anthem to '70s-era alienation into a haunted warning filled with regret and loss. A full-band performance of the nine-minute closer “The Next You Voice You Hear,” featuring Veneno on duet vocals, also includes the cajón, tres player Raul Rodriguez, Hawaiian guitar, Charlie Cepeda on baritone guitar, and Nunéz's whistle. It becomes a dry, arid, funky blues that sends the whole package off on a soaring though lonesome note. This could have been an experiment that failed miserably, drenched in nostalgia and excess; instead, it succeeds grandly because of a sparse, tasteful approach with excellent arrangements and genuinely inspired performances.