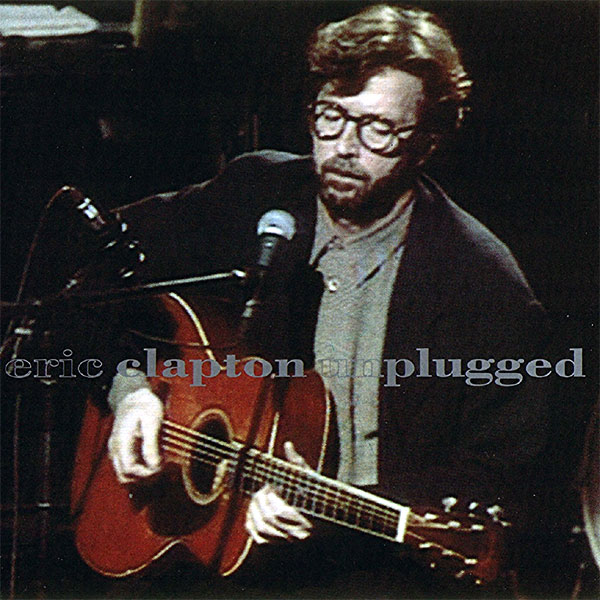 Reprise Records
AllMusic Review by Stephen Thomas Erlewine
Its massive success - it is one of the rare albums to be certified as diamond in the U.S. and it went platinum all over the world; it also won the Album of the Year Grammy for 1992 - makes it difficult to place Eric Clapton's 1992 MTV Unplugged in context, but it's important to do so. It arrived three years into MTV Unplugged's run -- 1989 also being the year Clapton stirred artistically with the assured AOR of Journeyman -- and a year after Paul McCartney established the practice of an official album release of an Unplugged session with his own Unplugged (The Official Bootleg). Also in 1991, Clapton's young son Conor died in a tragic accident. The guitarist wrote "Tears in Heaven" as a tribute to his late son and, via its inclusion on the 1991 soundtrack to Rush, it became a hit single and, later, a centerpiece to the Unplugged set. The passage of time has blurred the lines separating all these events, suggesting Clapton's 1992 Unplugged was the first-ever MTV album, that it alone was responsible for revitalizing EC's career, that it is was the place where "Tears in Heaven" premiered, when none of that is quite true. What is true is that Unplugged is the concert and album that established the MTV program as a classy, tony showcase for artists eager to redefine themselves via reexamination of their catalogs, which is what Clapton cannily did here. The album's hit was a slow crawl through Derek & the Dominos' "Layla," turning that anguished howl of pain into a cozy shuffle and the whole album proceeds at a similar amiable gait, taking its time and enjoying detours into old blues standards. Clapton is embracing his middle age and the pleasure of Unplugged is to hear him opt out of the pop star game as he plays songs he's always loved. Tellingly, it's these blues and folk covers -- Jesse Fuller's "San Francisco Bay Blues," Big Bill Broonzy's "Hey Hey," the standard "Alberta," Muddy Waters' "Rollin' and Tumblin'," two songs from Robert Johnson ("Walkin' Blues," "Malted Milk") -- that are the best performances here; they're alternately lively and relaxed, Clapton happily conforming to the contours of the compositions. These capture a moment in time, when EC was settling into his age by reconnecting with the past, whereas the originals -- whether it's the revised versions of "Layla" and "Old Love," "Tears in Heaven," or the debut of "My Father's Eyes," originally heard here (and on the 2013 expanded anniversary edition) but released as a single much later in the decade -- point forward to the sharply tailored adult contemporary crooner of the '90s, one who turned out to be very comfortable existing in a world of high thread counts and designer duds. These are the tunes that belong to the '90s -- and several of these also appear on the 2013 expansion, which contains songs that didn't appear on the album, almost all of which are originals apart from an alternate "Walkin' Blues" and "Worried Life Blues" -- but the rest of MTV Unplugged manages to transcend its time because it does cut to the quick of Clapton's musical DNA.