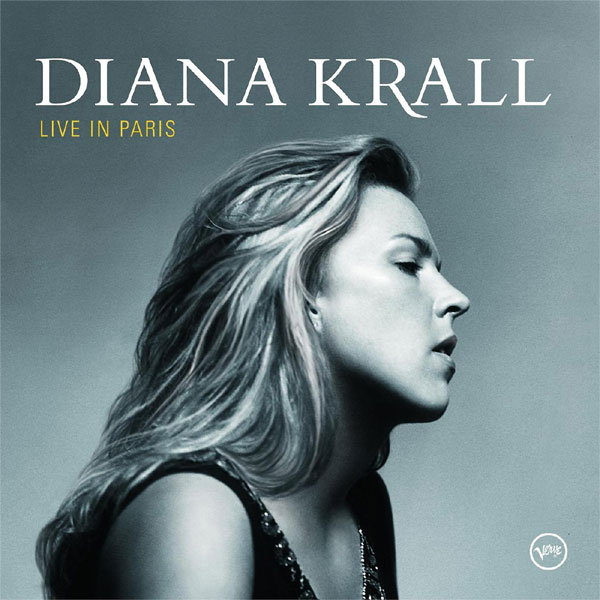 Verve
AllMusic Review by Paula Edelstein
Recorded "live" at the Paris Olympia, Live in Paris offers listeners Diana Krall's understanding of the musical techniques of composition, piano, and vocal improvisation on 12 songs from the Great American Songbooks of Cole Porter,Harold Arlen, George and Ira Gershwin, and contemporary artists Joni Mitchell and Billy Joel. Accompanied by the award-winning Anthony Wilson on guitar, John Pisano on acoustic guitar, John Clayton on bass, Jeff Hamilton on drums, and Paulinho Da Costa on percussion as well as the Orchestra Symphonies European on "Let's Fall in Love" and "I've Got You Under My Skin," the lovely vocalist heightens your listening pleasures with distinctive phrasings and tangible pathways to inside the creative imagination by getting inside harmony, the changes, and melodic structures. On Joel's "Just the Way You Are," Krall is accompanied by Christian McBride on bass, Michael Brecker on tenor saxophone, Lewis Nash on drums, and Wilson on guitar, among others. This song also resides on the soundtrack to the film The Guru and is probably one of the best ballads on the set due to the great solo from Brecker. His powerful but sensitive playing adds the ultimate expression and approach to the melody -- one with attitudinal preparation, which is always necessary for a song that has such familiarity and association with another musician. For those who may not have heard Krall perform "live," this recording will give you a firsthand account of the ambience and excitement of a musical evening with her.