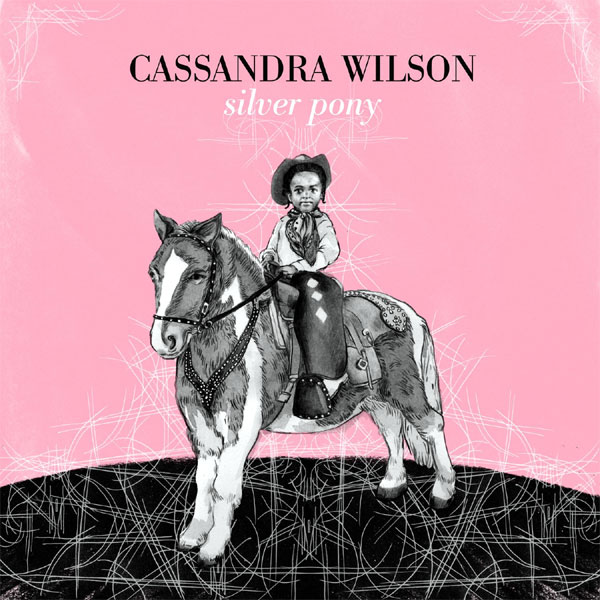 Blue Note
AllMusic Review by Steve Leggett
Yeah, Cassandra Wilson is a jazz singer, but she’s a 21st century jazz singer, mixing elements of jazz, pop, rock, Delta blues, and light funk into her performances, expanding what a jazz vocalist can be in a contemporary world with her horn player phrasing, smoky texture, and a voice that has matured into a haunting, sensual alto. She tackles some jazz standards, but she’s also adept at taking modern rock and old country-blues songs and finding a way to make them into new jazz standards, fully aware that she’s pushing boundaries in a genre that all too often plays it safe these days. Silver Pony is a delight, with a light, shimmering sound that makes each track feel like it’s part of a deliberate yet spontaneous fabric. Wilson and her band (Wilson on vocals and synthesizer, Marvin Sewell on electric guitar, Jonathan Batiste on piano, Reginald Veal on electric bass, Herlin Riley on drums, and Lekan Babalola on percussion; Ravi Coltrane adds saxophone on “Silver Moon” and John Legend adds vocals and piano on “Watch the Sunrise”) recorded live improvisations at European concerts in Warsaw, Seville, and Granada and brought them into the studio to expand and work on with producer John Fischbach, resulting in several new songs, and with a handful of carefully picked songs by writers as diverse as Charley Patton (“Saddle Up My Pony”), Stevie Wonder (“If It’s Magic”) and Paul McCartney (“Blackbird”), and with a couple of stone-cold jazz standards (Billie Holiday’s “Lover Come Back to Me” and the traditional “Went Down to St. James Infirmary”) to fill in the spaces, Wilson and her band have created a wonderful and almost seamless set of music that explores a lot of territory and yet still keeps its cohesiveness.